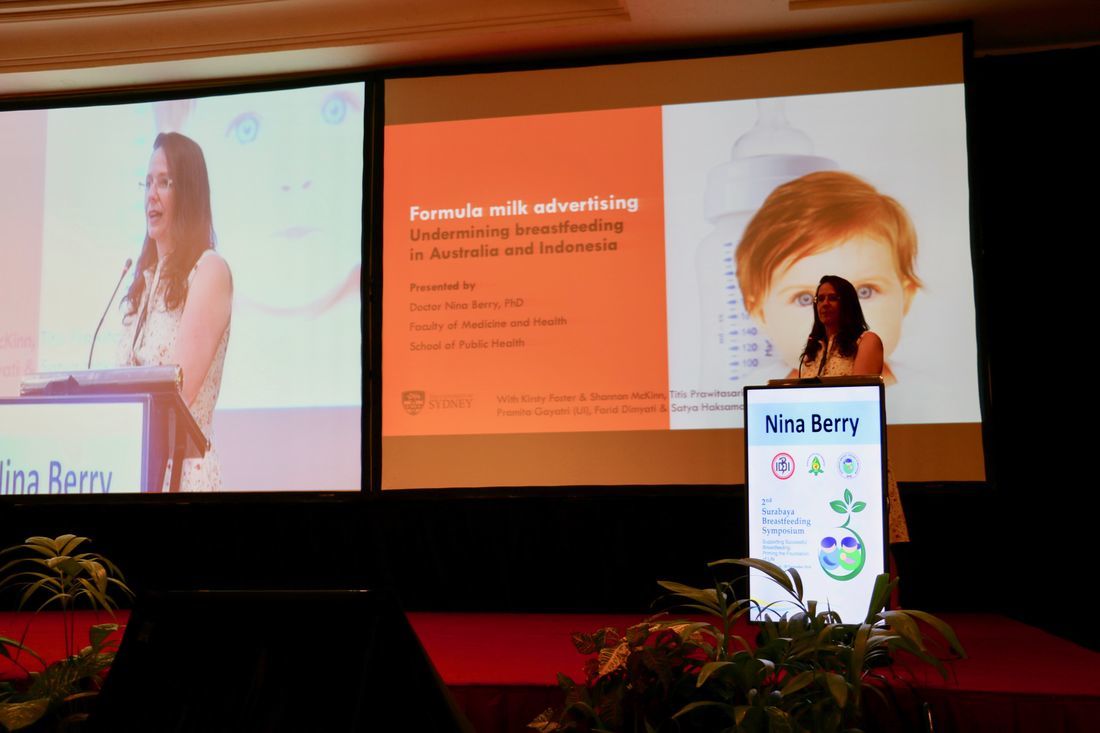 Today in Surabaya, at the 2nd Surabaya Breastfeeding Symposium, organized by the Indonesian Pediatric Society, East Java branch, Dr Nina Berry, from the Sydney School of Public Health at the University of Sydney, presented the findings from a research study funded by the Australia Indonesia Centre, which is a collaboration between the University of Sydney, Universitas Airlangga and Universitas Indonesia. The team interviewed mothers and health professionals in rural and urban locations in Australia and Indonesia to explore the effect of formula milk marketing on infant feeding attitudes, beliefs, and behaviours. Ms Anis Wulandari, one of the Research Assistants from the Universitas Airlangga, also participated in the symposium and was available to answer questions about her experiences with data collection in the rural and urban sites. Over 500 paediatricians and lactation consultants were registered and attended the two day event.

The World Health Organization recommends that infants be exclusively breastfed for the first six months of life, and continue to be breastfed as complementary foods are introduced from six months until at least the end of their second year. Despite compelling evidence that all other patterns of infant feeding increase health risks, the recommended pattern of exclusive and sustained breastfeeding is not widely practiced in Australia or Indonesia. National estimates of exclusive breastfeeding in Indonesia vary between 43.6% and 27%. Fewer than 25% of Australian babies are exclusively breastfed for the first six months of their lives. While poor breastfeeding practices are a problem shared by Indonesia and Australia, Indonesia’s Ministry of Health has achieved significant gains in exclusive breastfeeding prevalence since 2007. State based surveys suggest very few babies are exclusively breastfed for six months in Australia and the use of infant formula amongst breastfeeding mothers appears to be increasing. While Indonesia has enacted legislation to protect, promote and support breastfeeding, enshrining every child’s right to breastmilk, and every mother’s right to a supportive environment, Australia prefers a more ad-hoc system of voluntary self-regulation and local health promotion efforts. Aggressive marketing of formula milk contributes to early termination of exclusive breastfeeding and is of increasing global concern given the continued growth in infant formula sales in low and middle-income countries. Australian and Indonesian governments should consider evaluating and strengthening consumer protections governing the promotion of breastmilk substitutes.

For more information about this research or our engagement in Indonesia, please contact Danielle Somers on danielle.somers@sydney.edu.au.